Solo and Orchestral Trumpeter and Educator

Thoughts on music, trumpet playing, and education from Eric M. Berlin, Professor of Trumpet at the University of Massachusetts and Principal Trumpet of the Albany Symphony and Boston Philharmonic Orchestras.

I tell my students that I did not figure out how to practice until I was 30 years old, and I mean it. Some may be surprised that my practice experience as a child was far from exemplary. My mother loves to tell this childhood story. Hearing the same mistake over and over again, she opened my bedroom door to find me listening to my first attempt repeatedly on a cassette through my stereo while reading a book. A very funny story and an ingenious way to avoid the unpleasant task, I was not mature enough to really "practice.

In college, I "played" all day long - rehearsals for wind ensemble, orchestra, quintet, jazz band, during the day and duets, quartets and excerpts with friends any time I could find a willing victim. The "practice" that I did do however, was mostly random repetition, not focused on specific areas of improvement.

At the age of 30, several important things intersected to help me make some remarkable progress. These I believe are the key ingredients to cooking up real and rapid improvement.
1 - Reality check and objective assessment


After 4 placements on the alternate list in previous years, I finally attended Tanglewood as a Fellow. Surrounded by incredible colleagues, gaps in my playing, which I didn’t even know existed, became painfully apparent. These players, all much younger than I, were at the top of their game and able to play with clarity, precision and ease which I had failed to achieve. Ripped from the protective cocoon which let me feel satisfied with my playing, I understood that I could articulate more cleanly, play softer, access the upper register with less tension and generally be a much more consistent player.

In addition to a new clearer idea of what was possible from my peers, I began to use a recorder in earnest. When I was at NEC, we were all amazed by the “Walkman Pro” and the quality of sound we were able to get with a good microphone on a cassette. Today’s students have unprecedented technology available in the form of flash drive recorders with great built in microphones which give a clear and realistic sound we could not imagine two decades ago. The hardest thing to impress upon my students is the importance of recording oneself. There is no other way we can get close to an objective assessment of our playing. Internal pressure from playing as well as the fact that we are on the wrong side of the bell makes truly hearing yourself in the moment impossible.

Lets face it, nobody likes to hear themselves sound bad. However, you can avoid the unfortunate reality check which I faced if you do as Tom Hooten says, "swallow the honesty pill" in the privacy of your own practice room. Listen carefully to yourself without having to also play the instrument at the same time and you will find lots of room for improvement.

While at Tanglewood, Tom Rolfs became a tremendous mentor and falls into the reality check category as well. At a masterclass, I played the opening of Bizet's Carmen Prelude. For those not familiar, it is a sustained theme signifying fate which descends to a low concert Eb (F on Bb trumpet) in unison with the cellos. After playing it, Tom said "Great. Can you play it without vibrato?" My immediate and honest response was "I was using vibrato?!" Among those colleagues, it remains a humorous incident, but to me it was an embarrassing illustration that I was not aware of what was coming out of my bell! With his great ears and honest feedback, Tom continued to be a great role model and wonderful audition coach throughout the next decade.

Shortly after the conclusion of the festival, I made the phone call to Vince Penzerella which a friend suggested I make over a decade earlier. It is hard to adequately describe the impact which Vince had on my playing. By delivering similar concepts that I had heard from my previous teachers in a very different way, he brought into sharp focus things that I thought that I knew but didn't fully understand. With this new understanding, I couldn't stop looking to find more layers of detail that I had missed.

Let's face another simple truth, there are more similarities to the way we all play trumpet than how we explain it. The same concepts of air support, embouchure and articulation can be explained in three (or more) very different ways by three different players. Each of us as humans has a unique way of experiencing the sensations of playing the trumpet and different weaknesses which we focus on to improve. These things define how we verbalize the experience. It is of vital importance that we seek many different opinions, not only of style, but of explanation of technique, to make sure that we have a better chance of finding the combination which works best for our unique mind and body.

Although Vince did wonderful work with me on air and gave me a new understanding of embouchure, the most valuable gift he gave was the following:

Vince gave me the most concise and no-nonsense approach to improvement that I have ever heard. I will present it with more detail in another post, but in its simplest form it is:
There is no better way to improve. The first point is so vital, but most often gets lost among more pressing concerns as  "putting in the hours" or "building up endurance" or "building muscle memory". The second is training us for the real job of performance. For many young players, the first time they play through piece without stopping is in a lesson or in a concert. The third part is impossible without a model to compare to.

Most trumpet players are willing to put in time, but few have the discipline to follow this routine. To really invest in this process takes a level of maturity which I did not have while in school. I hope you can find it earlier than I did, but whenever you do, it will pay dividends.

At Tanglewood, a fellow trumpeter and I began to work together toward our mutual improvement. Back in Boston, practicing in a church or gymnasium several nights a week, sometimes 5-6 hours a night, this relationship combined the previous three points and over the next few years resulted in the most dramatic improvement that I have ever known.

Not only were we recording, but there were objective ears that could listen to us "live" in the moment to give an immediate impression. Recording allows us to relax and stay in the moment when we play, but our own ears become accustomed to what we hear on playback. In a buddy session, the recording (at that time, a portable DAT or minidisc recorder) was a great way to play back and study what our partner heard so that we could recognize it in the future. Instead of shame and embarrassment when my practice buddy called my attention to something I missed, I was elated! From that knowledge came the ability to address a weakness and create a stronger total package. A partner who you can trust to honestly assess areas of improvement without "beating around the bush" is a Midas touch for your career. Be sure to be that honest partner in return.

We believed so strongly in the power of our practice routine that we brought it along to auditions. At one audition, even though we had traveled separately, we were in the same town a day early. What did we do? Bought a small recorder at a Sony outlet store and headed to a famous outdoor amphitheater to practice. We both made it to the finals.

Conclusion: The ability to improve comes from the clearest picture of what your skills and weaknesses actually are. "Swallow the honesty pill" and record yourself, play for different people for new ideas and listen objectively to target areas of improvement. With a structured practice routine which begins with a clearly defined ideal goal, you should find your way to rapid improvement. Good luck! 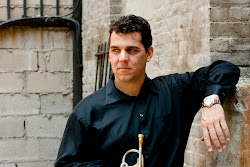 Where To Find Eric

Yamaha 9445C "Chicago" C trumpet - My main axe and the best trumpet I have ever played!
NEW - Yamaha Chicago II - Is even better! Holy Crap!

Schagerl "Horsdorf Heavy" Rotary C Trumpet - I can't believe it's a rotary! So easy to play!

Yamaha 8310 Z "Bobby Shew" Bb Trumpet - Sure it is a "lead" horn but it barks out low orchestral passages like no other.

Bach Stradivarious 180ml 37 Bb trumpet (early Elkhart, late 60s) This horn has a custom leadpipe by Jim Becker at Osmun Music and been overhauled and double silver plated then gold plated by Jim.

Schilke P5-4 Piccolo Trumpet - The same horn I have played since 1985.

Keefer Cornet - from the early 1920s. A great vintage horn I used when I won the first Streitweiser Trumpet Museum Cornet Competition

Monette B1-2 cornet mouthpiece for piccolo trumpet. This came with Tim Hudson's original Monette Cornet in 1990. Was the model for piccolo mouthpieces later produced by Monette.